Hawaii is a land of magic and wonder. This well known but extremely remote island chain in the vast Pacific boasts some of the most beautiful beaches and natural attractions in the world. Visitors flock here to experience its many amazing destinations, and locals have a steady appreciation for the endless beauty the islands offer.

Lounging on the beach and splashing in the waves might be the most common activities for the average tourist, but each island has so much more to offer. The many parks that dot the four main islands are a great way to experience Hawaii off the beaten path. Read on for a quick guide into some highly recommended parks to discover while you’re here.

If you have never been to Hawaii before, you may not realize that although this is the name given to the state, it’s actually the name of the largest landmass in the chain – The Big Island. This is the most volcanically active and often most rugged island and has some great National Parks to explore.

The images you may have seen of flowing lava fields steaming into the sea and magma erupting into a star-filled expanse are more than likely from Hawaii Volcanoes National Park.

This National Park is home to unreal beauty that can inspire and frighten visitors who see first hand just how volcanically active the Big Island still is. Kīlaue and Mauna Loa, two of the most active volcanoes in the entire world, sit within the park’s boundaries. The terrain is vast and varied here, and you can explore heights from sea level to 13,677 feet on the same day.

The Park covers around 523 square miles, which is almost as big as the island of Oahu. Within its boundaries, you can hike through volcanic craters, view ancient petroglyphs, and if you’re lucky, see a volcano in action.

Top sights within the park include the Crater Rim Drive, the Puu Oo Vent, and the epic Halemaumau Crater. Always be careful when visiting to hike and drive only on marked roads and trails. Be prepared for rapidly changing weather and high elevations as well.

There is so much to see within Hawaii Volcanoes National Park that you might want to take a couple of days to explore it all. The nearest city, Hilo, is about 45 minutes away and offers excellent accommodations.

The first Polynesian travelers arrived in Hawaii over 1500 years ago. They developed a rich culture and society that continued to thrive before the early European settlers arrived in the 1700s.

Pu’uhonua o Hōnaunau National Historical Park offers a glimpse into the storied past of the proud Hawaiin people. The park is home to several important archeological sites that show some of the first buildings and structures erected on the island. This site was built to be a place where women, children, and casualties could come during times of war for peace and safety.

Ancient laws, known as the kapu, were strictly enforced and punishable by death in Hawaii. If you were accused of breaking these laws, your only chance of survival was to reach Pu’uhonua o Hōnaunau, which translates to ‘place of refuge.’ This park has a stoic power and beauty that will satisfy history buffs and anyone with Hawaiian heritage.

You can find walls that are hundreds of years old, reconstructed buildings, fishponds, and the remnants of a village that once stood within the boundaries of what’s now a park. This isn’t as expansive of a park as some of the other options you’ll see here, but still well worth a visit.

Moving up the island chain sits the Valley Isle, better known as Maui. Here you will find some world-class beaches and high-end resorts. The waters off Maui also offer some of the best from shore whale watching in the world, with large numbers of Humpbacks appearing between November and March every year to give birth and breed. There are a few must-see parks here as well.

Maui is made up of two dormant volcanoes, and Haleakalā is the largest, nearly covering the entire southern section of the island. Haleakalā National Park is another fantastic park to explore to take advantage of the diverse life and landscape here. It’s also another highly significant location to the Hawaiian people and holds great cultural relevance.

Hiking through the crater here is a must-do activity if you are up for it. It’s a surreal sight to see, and the 11-mile hike will bring you inside the heart of a volcano. There are plenty of other hikes to explore as well; just be sure to stay on designated paths and trails as the ecosystems within the park can be very fragile and are home to endangered species of plants and animals.

Haleakalā also makes for one of the best spots on Earth to catch a sunrise or sunset. This is a very popular activity within the park, so much so that you need to make reservations to view the sunrise. Even though you might be with a crowd, this experience is still more than worth it.

The Road to Hana is one of the most scenic drives in Hawaii, if not the world. There are many sites to see along the way, but Wai’ānapanapa State Park is one of the best. This park is home to a famous black sand beach outlined by stunning bright green foliage and framed by ancient lava flows.

The park offers camping and cabins, making it one of the only places in Maui where you have camping close to a beach. You need to make reservations ahead of time to stay here, but there are typically sites or cabins available if you time it right.

The park also has lava tubes, blow holes and a few trails that criss-cross the lava fields in addition to the black sand beach. While the beach is beautiful, it’s not the safest spot for swimming. A rocky bottom, heavy shore break, and no lifeguard mean you need to be an experienced swimmer or well aware of the risks you take in the water.

Safety warning out of the way, Wai’ānapanapa State Park is gorgeous and as of right now, it’s still free. Being somewhat remote, you can also expect less of a crowd here than some of the other beaches on Maui.

Oahu is the most populated island and is home to famous locations such as Waikiki and the North Shore. While this means the sights here can get crowded, that doesn’t mean they aren’t worth seeing.

Diamondhead State Monument is a well-known and often visited park. Known as Lē’ahi in Hawaiian, it’s one of the most recognized landmarks in the islands because of its proximity to Waikiki and large population center.

This is another natural wonder created by volcanic activity. It’s a large crater easily visible from the air but seen as large, steep peaks when looking at it from land. The park surrounds the entire crater and offers nearly 500 acres to explore. The crater holds historical significance both in terms of geology and military use during WWII.

The hike to the summit of Diamondhead is short but can be challenging. You head straight up the side of a crater, and even though you’re at sea level, you will be huffing and puffing as you reach the top. It’s a beautiful view from the top and well worth the effort. If you are in Honolulu or visiting Oahu, this is an easy and recommended stop.

Kaua’i is rugged, wild, and wonderful. It’s the least populated island and is the oldest landmass in the chain. Most of the population lives around the island’s outside edge as the inner is steep jungle terrain that offers as much magic as mystery.

If you travel to Kaua’i, Waimea Canyon State Park is a highly recommended stop. The beauty to be found here is unmatched and will give you a glimpse of a time before humans ever knew the islands existed.

The canyon itself is impressive. It is 14 miles long, 1 mile wide, and 3,600 feet deep. There are many viewpoints to look out over its vast depths and gaze into the seemingly endless expanse. You will see stunning contrasts of red rocks and every color of green, highlighting the abundance of plant life the canyon holds.

There are a few good trails to help you access and explore Waimea Canyon. The Kukui trail is a recommended trek and is absolutely beautiful. You can go on extended stay trips within the park, you just need to get a permit in advance to do so. Whether you are hoping to catch a photo or want to explore the inner-depths of another natural island wonder, this state park will give you the best of both worlds. 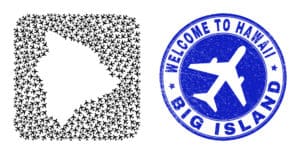 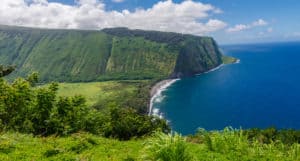 The Wonder of Waipi’o Valley 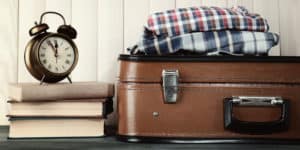 Your Ticket to Hawaii: the Best Guide Books to Bring on Your Trip