Merriman’s, Food Fit for a King: A Review

Representing evolving approaches to modern cuisine while offering a true taste of the islands, Merriman’s is one of the top restaurants on the Big Island of Hawaii. The magic of this now-famous dining location comes from the unique and vital relationship Chef Peter Merriman has built with local farmers over the last 25+ years. By building the menu from locally sourced ingredients, Merriman has pioneered the culinary culture in Hawaii to veer away from big plantations and imported items. Local fishermen, ranches, and farms are the pulse of the island and at the heart of his restaurant’s philosophy.

Merriman’s is a must-visit restaurant for all visitors to the Big Island, whether you are a seasoned foodie or just looking for a quality meal. Supporting the local economy is vital here, and although every tourist dollar helps, spending away from the big resorts more directly helps the many people who build their lives and support their families working the rich, abundant volcanic island soil. On top of these moral and ethical considerations, Merriman’s is downright delicious. Every dish is special and represents Hawaii at its finest – a rich tradition of community base on a deep connection to the land.

Peter Merriman first began his career as a chef in Hawaii in 1983. He got a job as a cook at the Mauna Lani Bay Hotel and moved from Pittsburgh, PA to the islands shortly after. His kitchen skills were quickly recognized, and he earned an Executive Chef position within two years, in part because of his commitment and desire to focus on cooking regional cuisine that sourced local ingredients. The only problem with this desire was that there simply weren’t that many local products available at the time.

So he took it upon himself to change that, reaching out to farmers, ranchers, and fishermen – anyone who was a part of the local food sourcing community. Merriman told these potential suppliers that if they could deliver consistent local products, he would purchase consistently and help turn things into a valid and growing economy of small-scale producers. These early relationships established the foundation for a prosperous future that would help many people on a local scale while creating destination restaurants known the world over.

A few years after establishing these initial connections, the first Merriman’s restaurant was opened in Waimea in 1988. It was nearly an instant success, but the excitement and popularity would not distract from the commitment to the community. From here, the restaurant and its network of local growers and producers continued to thrive, and they still do today. This innovative approach to island cuisine has established a longstanding tradition that is now a generational affair with families of farmers, fishermen, and cooks supporting one another every step of the way.

Today there are five different Merriman’s locations scattered across the four major Hawaiian islands. On the Big Island, you can still find it in Waimea. Lunch is served from 11:30-2:00 and dinner from 5:00-8:30 – you’ll need a reservation for the latter. The restaurant also has a Sunday brunch from 10:30-2:00. Regardless of when you sit down, you’ll be in for a memorable treat.

The farm-to-table nature of the restaurant means that the menus are always evolving and changing. What doesn’t change is quality and freshness. You will find some of the freshest ingredients anywhere on the island here, which translates into flavor. Whether you want to sample fish caught the same day, locally ranched meat, or a variety of almost endless produce, there’s something for every palate.

Classic dishes include the Ahi, which is a signature dish all over the islands. Merriman’s presents a wok charred version, best served rare. It’s served on a bed of fresh won bok cabbage slaw that is subtle but flavorful. A wasabi soy sauce tops it off and brings things close to seafood perfection. A butcher’s cut of lamb is another staple dish that comes from nearby Kahua Ranch. This is served with a housemade pappardelle pasta accompanied by flavorful hamakua mushrooms and a smoked pecorino that gives just enough salt to the savory.

The rest of the menu will vary depending on when you visit and what is in season. There is typically a fresh fish of the day that is caught the same day. This will be a Chef’s presentation and always a good bet. Other seafood concoctions will be available, including everything from lobster to any and all of the flavorful fish that reside in the reefs and waters just offshore. Produce is plentiful and makes for unique, outstanding vegetarian options as well.

To start things off, the ceviche and vine-ripened tomatoes come highly recommended. The ceviche comes with island-grown sweet potato chips and a splattering of citrus and lettuce. It’s light and delicious.

If you’re part of the lunch crowd, Merriman’s makes a damn fine burger. You also can’t go wrong with the fish tacos or fish sandwich. These plates include the fresh catch of the day, which is also available as a full lunch plate if your mind is already made up.

Merriman’s also has an extensive and thoughtful wine list to pair with your dish. This is where you won’t find a local option as island wine is not available. You will find an assortment of Italian and Californian varietals, with an informed staff to direct you toward the best choice for your preferences and plate.

If you are searching for a memorable and magical culinary experience on the Big Island, Merriman’s is not to be missed. The food here is phenomenal, and the spirit of the islands rings true in each ingredient and every bite. It’s a more than recommended experience while you’re here and a top restaurant to visit for conscious connoisseurs and casual diners alike. It’s food fit for a king, with the support of the entire community. 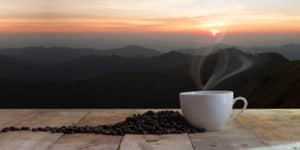 A Connoisseur’s Guide to Kona Coffee 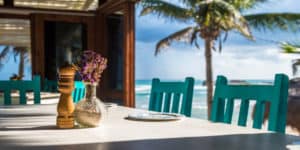