Along an unassuming side street within Big Island’s Hawaiian Paradise Park neighborhood is Hobby Garden – the brainchild of long-time island resident Johnson Lum, who many years ago sought to build a one-of-a-kind amusement park on his acre of rural, agricultural land that was equal parts science fair, petting zoo, museum and teaching farm.

Johnson has poured his heart and soul into the place, designing, building and maintaining all the attractions himself, with some extra help at times from of his wife Yamna. He’s a hobbyist, collector and tinkerer whose interests run the gamut from electrical engineering to sustainable agriculture to scientific research, and who has earned a sort of celebrity status around town as “Hobby Garden Guy.” He has built remote-controlled boats, working model trains large enough to carry child passengers, dinosaurs, volcanoes, scale-model cities and bewilderingly complex, carefully arranged collections of miniatures.

All of these creations and much more are spread out across Hobby Garden; basketball and mini-golf, enclosures for tortoises, rabbits and songbirds, a row of homemade seaworthy boats, a fishpond teeming with glinting rainbow-colored fish sought after by young kids wielding poles and casting barbless hooks, and even a rideable model train that loops through it all. This last attraction is arguably the Garden’s most famous – the ones that manages to make it into all the photos of smiling patrons. Like everything else, Johnson built the train himself using a repurposed weed-whacker engine for its power source. He’s also its conductor, and drives the scaled-down locomotive along a narrow, circular track built atop countless wooden, hand-laid railroad ties.

Beside the train tracks is a 150,00 gallon fish pond teeming with schools of swirling fish, ranging in species from koi to tilapia to midas to the the frightening-looking dark grey fish from South America’s Amazon Rainforest known as the “red-bellied pacu”. The park offers complimentary fishing poles to attendees, who gather at the guardrail made of painted metal lattice built at hip-height around the pond and cast barbless hooks out into the murky water, hoping to get a bite. There’s a strict catch-and-release policy at the park, which Johnson usually administers himself, although his family does at times use the tilapias for food.

Surrounding the pond is a maze of indoor and outdoor exhibits; rooms with plexiglass showcases stacked floor to ceiling, containing every imaginable type of model machine from cars, trucks and tanks to sailboats, steamships, airplanes, rocket ships and many more. An entire section of the park is dedicated to painstakingly arranged cultural dioramas, mostly depicting scenes of everyday life from around the world and throughout history. There’s a Great Wall of China scene punctuated with piles of Chinese artifacts adjacent to a miniature Eiffel Tower and a typical French city street. There are models of the White House, Statue of Liberty, Golden Gate Bridge – even an outer space moonscape complete with rovers, satellites and astronauts.

Farther down the avenue of miniatures is a Polynesian-themed exhibit, which includes a fog-machine volcano of textured, lava-like concrete. Part of creating this special effect involved squeezing wet cement out of an icing bag to form the smooth, ropey texture that is the hallmark of hot, viscous lava known as “pahoehoe” in Hawaiian. Johnson got this idea from his original occupation back in his home country of Fiji: pastry chef. Beside the volcano is a scene of grass huts, babbling streams and marshy patches of the ubiquitous Polynesian staple crop called taro.

This particular exhibit is a replica of the ancient Hawaiian land division known as the ahupua’a (AH-HOO-POO-AH-AH), which split the island into slices like a pizza and organized the trading of upland farm crops with fresh fish and other edible sea life caught by lowland coastal villages. The details of this display in particular are pretty astounding: Johnson was keen to include a row of handsomely crafted model outrigger sailing canoes, and even a pig cooking in the traditional Hawaiian earthen oven known as an “imu” (the source of smoky flavor in the iconic Hawaiian dish called kailua pork).

As the park’s optional tour guide, Johnson is a valuable wellspring of knowledge about how ancient Pacific Island societies functioned, and one of his main goals in running Hobby Garden is making this type of engaging cultural education available for schoolchildren. As such, it’s common to see school buses in the parking lots and gaggles of excited students running from station to station as they try to cram it all into one afternoon.

Hobby Garden’s Food Forest, Fruit Tree Nursery, and The Seaplane That Started It All

Beyond the machine museum and line of tabletop dioramas is a sprawling forest of tropical fruit trees; some conventional fare like citrus, papaya, banana and avocado, but also some truly exotic types like soursop, Brazilian Cherry and sapote. Whatever surplus fruit the trees produce becomes compost to feed the fish, usually lobbed out into the pond periodically throughout the day to a raucous whirlpool of excitement. From time to time, Johnson and his wife work together to pump out some of the sediment-rich pond water and spray it on the surrounding plants as fertilizer. This, Johnson says, is true “sustainable farming” – another facet of the park’s educational endeavors.

In one corner of Hobby Garden’s grounds is a sizable fruit tree nursery, stocked with saplings of many of the trees growing just a stone’s throw away in the food forest. The nursery serves much of the same purpose as the fishpond: primarily to provide food for their own kitchen, with the option to sell an unneeded portion for extra income. In between groups of park attendees, Johnson can be seen milling around the property, tending to the young trees, fixing broken railroad ties and throwing handfuls of cat food into the ponds to feed the fish. He rarely ever seems to sit still, imbued with boundless energy and a keen eye for making upgrades.

Of the thousands of different miniatures crammed into the park, the most important one is found in the aptly named “Wow Room”, called this after the audible expressions of wide-eyed visiting schoolchildren who catch their first sight of the house full of Hot Wheels treasure chests. Here, hanging overhead and serving as the rooms imposing centerpiece, is an handsomely painted scale-model of the World War II-era British seaplane known as the Sunderland Flying Boat, which in its heyday boasted a more than 100-foot wingspan and broad belly. It’s a handmade mock-up of fiberglass and wood covered in a skin of thin aluminum sheeting and detailed to look like the real thing – something that has held a special place in Johnson’s heart since he was a six-year-old boy growing up in Fiji. 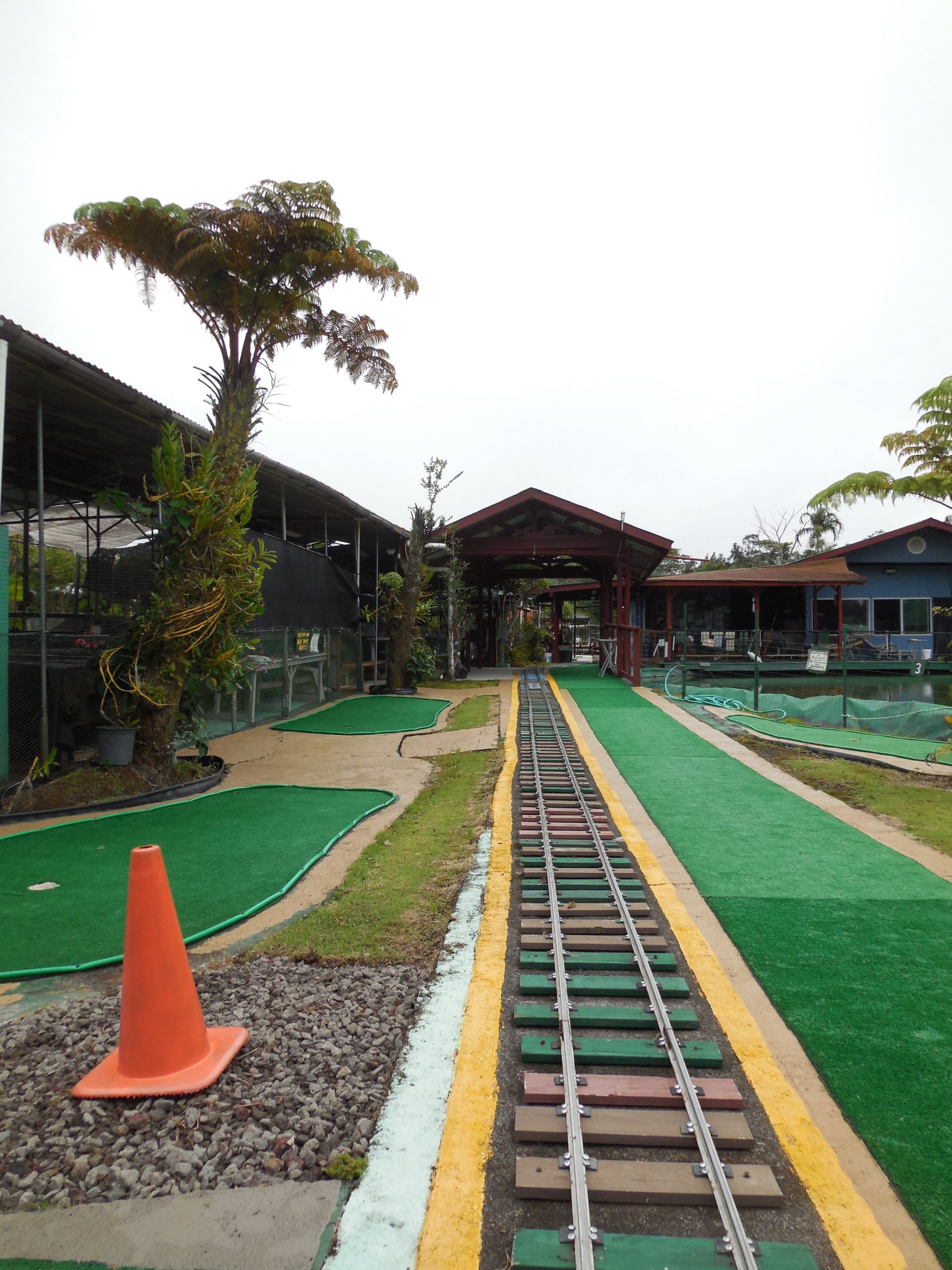 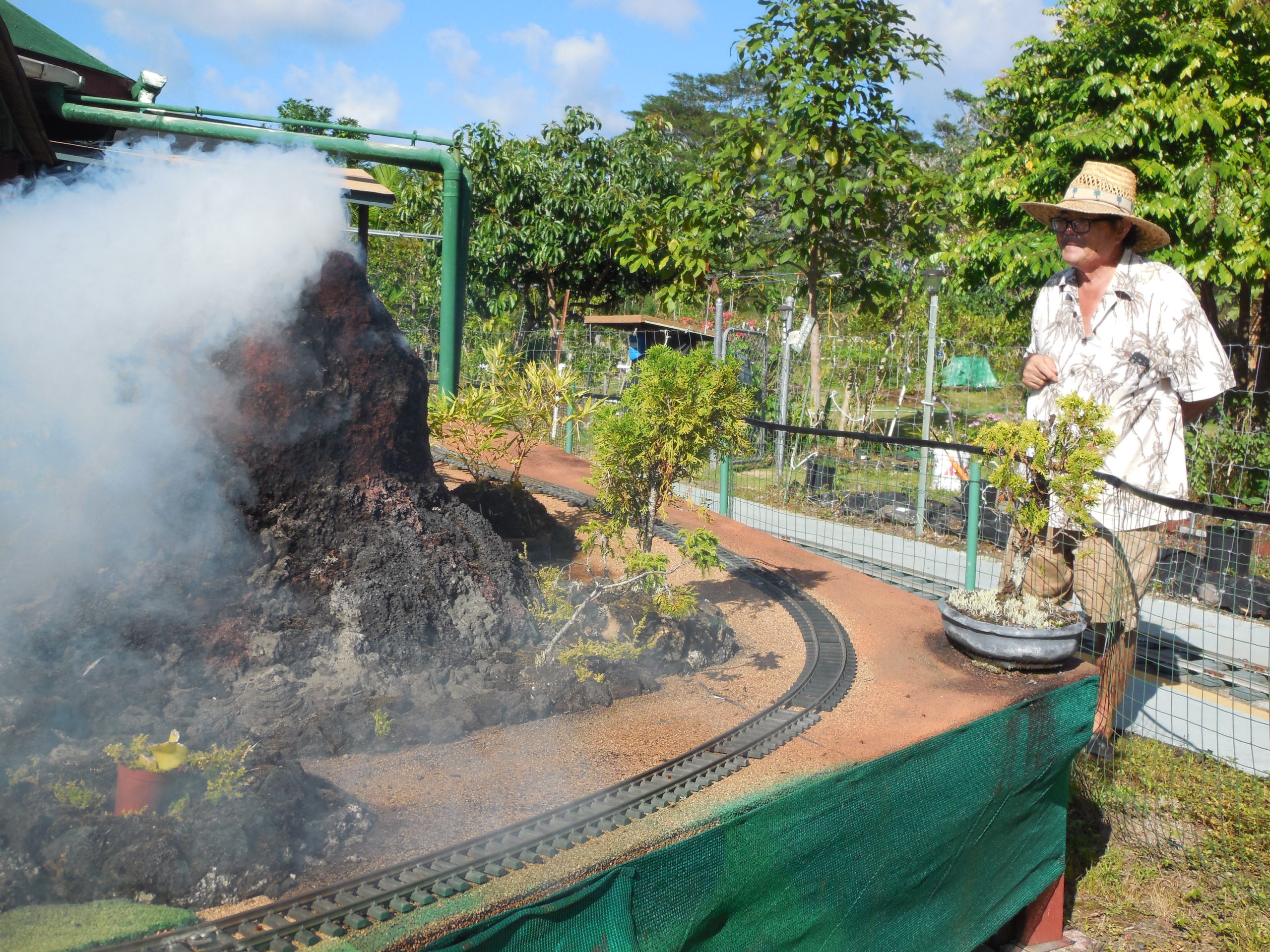 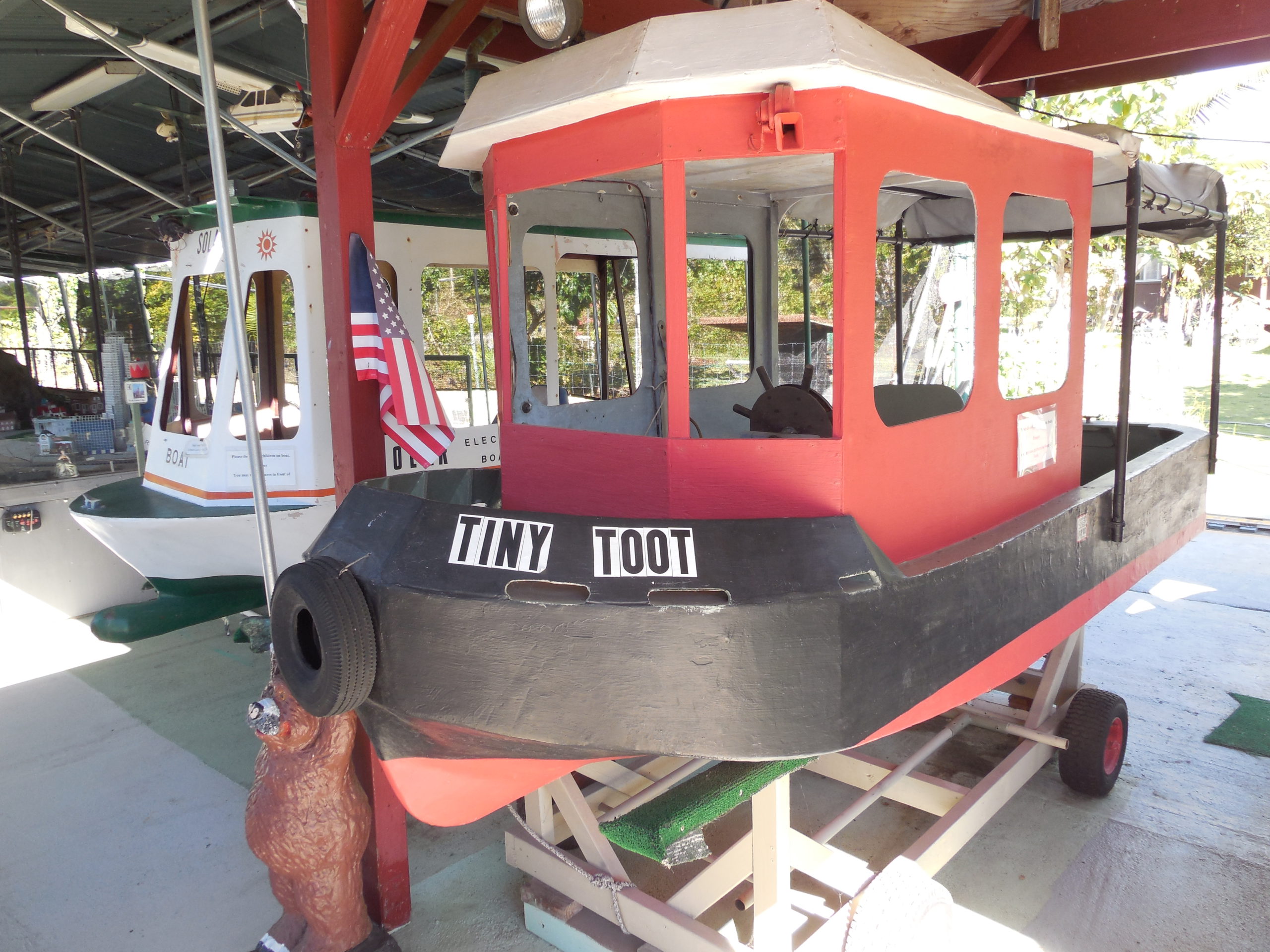 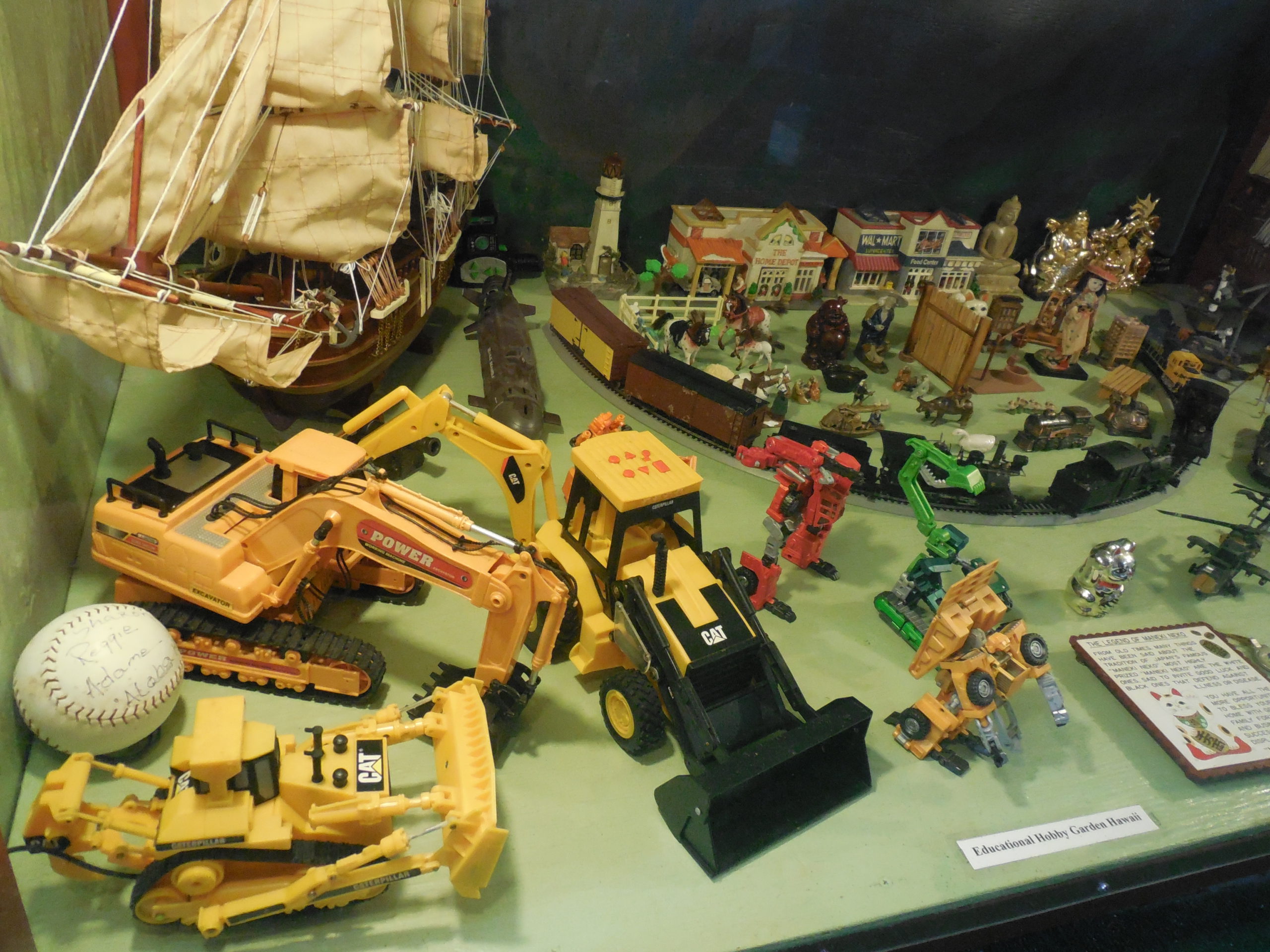 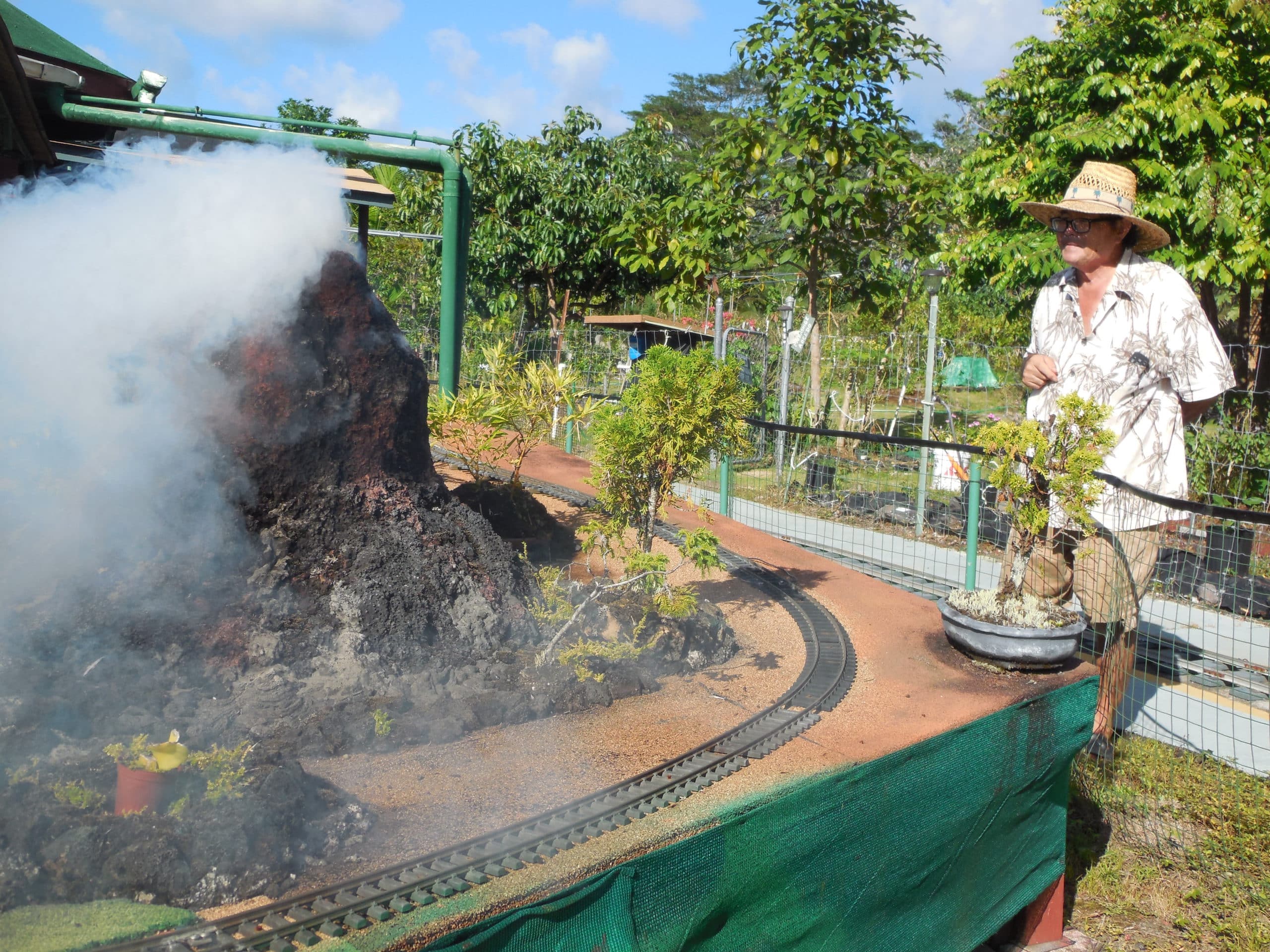 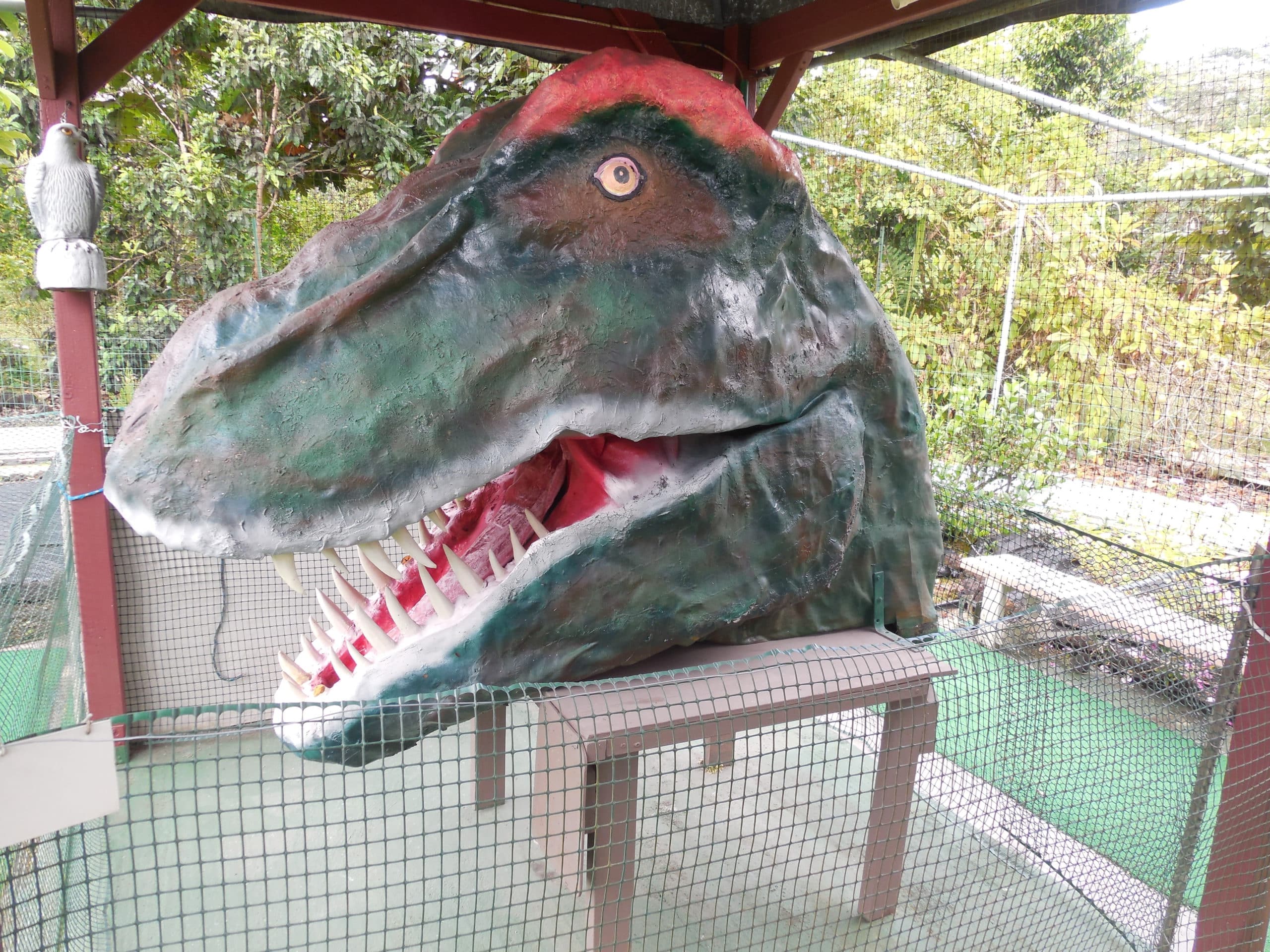 All those years ago, these big planes would fly over his grandfather’s house on the main island of Viti Levu every other day, departing and landing at a nearby navy base while on reconnaissance and search-and-rescue missions across vast, isolated swaths of the Pacific Ocean. He still remembers the sound of its four roaring engines – it was an experience that ignited in his young mind a passion for learning the intricacies of how machines work. It drove him to become a self-taught engineer who, now in his late-60s, happily surrounds himself with anything with a motor, whether life-size or miniature.

How To Get There

Hobby Garden, also known as “Mini-Wonderland”, is located along 12th Avenue in the Hawaiian Paradise Park neighborhood of East Hawaii Island between Paradise Drive and Kaloli Drive. Locally known simply as “HPP”, the neighborhood can be found a few miles south of the old sugarcane town of Keaau along Highway 130, on the way to the rainswept bohemian town of Pahoa.

The Garden’s street address is 15-1695 12th Avenue, and it is open from 9:00am to 3:00pm daily. Hours and admission fees are subject to change, and it’s always a good idea to get in touch with Johnson via phone before planning a visit to get the most up-to-date information. Most of the attractions are geared toward children, making it an ideal stop for parents visiting Big Island with their families, although solo adults curious about tropical agriculture and model-building still seem to have a good time here.

Other nearby attractions include the Maku’u Sunday Farmers’ Market and the several-mile-long roundtrip hike out to Shipman Beach, both of which are featured in their own full-length articles on this site. The market grounds and the trailhead for the beach hike are both found in HPP, as are a wide variety of short-term vacation rentals for those planning to stay a few days in the island’s rural, rugged and supremely beautiful Puna District.